Tuesday’s Full Moon in Taurus takes place a small fraction of a degree from the asteroid (4) Vesta. This is a remarkable conjunction, and a peak moment of Vesta’s extended stay in Taurus (which extends from June 10, 2019 through March 21, 2020 — notably, the same day Saturn enters Aquarius).

The Full Moon’s aspect pattern includes Mors-Somnus in a close conjunction, which asks the question, “Is it sleeping, or is it dead?” There is Achilles (false lack of confidence in women), Lachesis (the allotter, who determined the length of life), and Praamzius (named for a Lithuanian god of the sky, peace and friendship). Mercury retrograde is conjunct the Sun, just past the interior alignment.

Many interesting points are gathering in Taurus at this time in history. They include Uranus, and Lempo (a Nordic fertility and sexuality goddess). There is 1992 QB1/Albion (which I consider to be a manifestation of Vesta). And there is Sedna (with a 11,400-year orbit; named for an Inuit creation goddess, and associated with global warming, and the theme of “nobody is good enough for me”).

There’s no succinct “meaning” to this pattern. We just get some themes to look for, in addition to the time-tested ideas of Vesta itself. These include devotion (whether to work, to a cause/purpose, or to a person). There is the experience of holding space for the healing of others; unusual relationship patterns where Vesta is prominent in the natal chart; and the process of unraveling guilt and shame.

I suggest keeping a pulse on the basic themes in the paragraph above. Vesta is best identified by her life pattern, the most common of which involves relationships where someone prepares people for their next partner or lover, who often turns out to be a major relationship. The Vesta person can experience long phases of not having a partner, and some form of abstinence from sex with partners.

The Devotional Essence of Vesta

I discovered the basic essence of Vesta one cold winter 23 years ago. I had just rented and moved into a house with a wood stove, for the first time. We didn’t have enough money to fill the oil tank. The previous tenants had left us a small woodpile, but it had been out in the rain for as long it had been standing there. But it was all we had to heat with, and we definitely needed to do something.

It was hard work getting soaked firewood to burn. And it is not efficient; much of the heat of the existing fire is consumed drying out the new wood that is added.

So I began a process of bringing in wood and keeping it by the stove so it had a head start drying out. That was not worth much, but it seemed to help a little.

If the stove went out, it would be hard work getting it going again, so I had an interest in keeping the fire alive. To do this effectively, the fire had to be tended about every four hours at the most. So began an around-the-clock vigil to keep the coals hot and burning — hot enough to ignite soaked firewood.

This turned out to be quite an effort, and a work meditation: day after day, night after night, tending both the wood and the fire, including the bit about making sure I didn’t burn the house down if it went out of control.

Slipping into the Vestal Reality

We used a picnic table brought in from the porch in the kitchen (it was free), where the wood stove was. Late one night after tending the fire, I drifted off into half-sleep laying on the bench. I flashed back into some hologram of the Vestal Virgins: the Roman high priestesses whose job it was to keep the sacred city fire going. I slipped into that reality for a moment, and could feel, in my body, the deep responsibility to keep the fire alive, which was the primary, constant responsibility of the Vestals.

The city fire was a symbol of purity and of purification, maintained by virgins, who were by religious definition pure people.

The priestesses had other responsibilities. These included standing on ceremony at state functions, and the preparation and storage of religious substances made from ingredients like spelt and the dried placentas of sacrificed animals. All the time, they were under threat of death. These priestesses were considered daughters of state. Sexual relationships were therefore “incest” and treasonous, punishable by being buried alive or beaten to death. Others self-immolated.

Two who were accused are reputed to have proven their purity: one named Tuccia, by carrying water in a sieve, and another named Aemilia, by rekindling dead ashes with her garment; that is, by miracle.

From what I have read, there was a pattern to the accusations of incest, of which nine are recorded. They typically happened in times of social strife, or diseases and plagues that afflicted women. In essence, the Vestal Virgins bore tremendous collective responsibility — something to look for in the charts of those with prominent Vesta. And in their supposed purity, they were set up to be scapegoated. At times, there was politics involved: including which faction supported a particular Vestal or who one’s relative was.

The devotional themes of Vesta are fairly easy to work with. The two I find the most useful and interesting are the role of preparing others for subsequent relationships, and the healing of guilt and shame. These are both space-holding functions, about which our society knows very little right now.

Vesta represents sacred space, which we could define as private, personal space held with a specific purpose. Healing generally happens within a space set up to accommodate it, whether we’re talking about a massage room, an operating theater, a ritual fire, or calling in the four directions.

The person representing Vesta is the holder and preserver of the space. To do this, they temporarily set aside their own needs, and focus on facilitating for someone else, or for a larger purpose. To me, Vesta is synonymous with seva, Sanskrit for “selfless service.”

I could write a chapter about each of these themes. But for now, let’s consider one: what it means to facilitate the unraveling of, and the healing of, guilt and shame. In order to do that, the first step would be to stop projecting those things. They need to stop being seen as positive values; as tools, guilt and shame are used primarily for social control.

They are among the toxic remnants of childhood, which tend to strongly shape the worldview of the adult. I cover this in the article How To Be Your Own Lover.

However we might heal guilt and shame, it’s essential to remember that this takes space, time, and avoiding repeat injury. The person in the role of healer must be vigilant over their own mind and feelings.

I wish there were an easy way to explain this process, but there is none that I know of. Fair to say that it starts with asking the right questions, and observing how these emotions manifest for oneself. It has to start with you. There are those in a position to help who have either gone through the necessary undoing, or who just intuitively get it.

Today, our society easily becomes engulfed in accusations of sexual impropriety and impurity, which is about the projection of guilt and shame. It helps not to take part in these things, and to recognize them for what they are.

Perhaps the most easily stated element of healing guilt and shame involves turning toward, rather than away from, the supposed source or topic. That calls for honesty and courage, which are often in short supply. 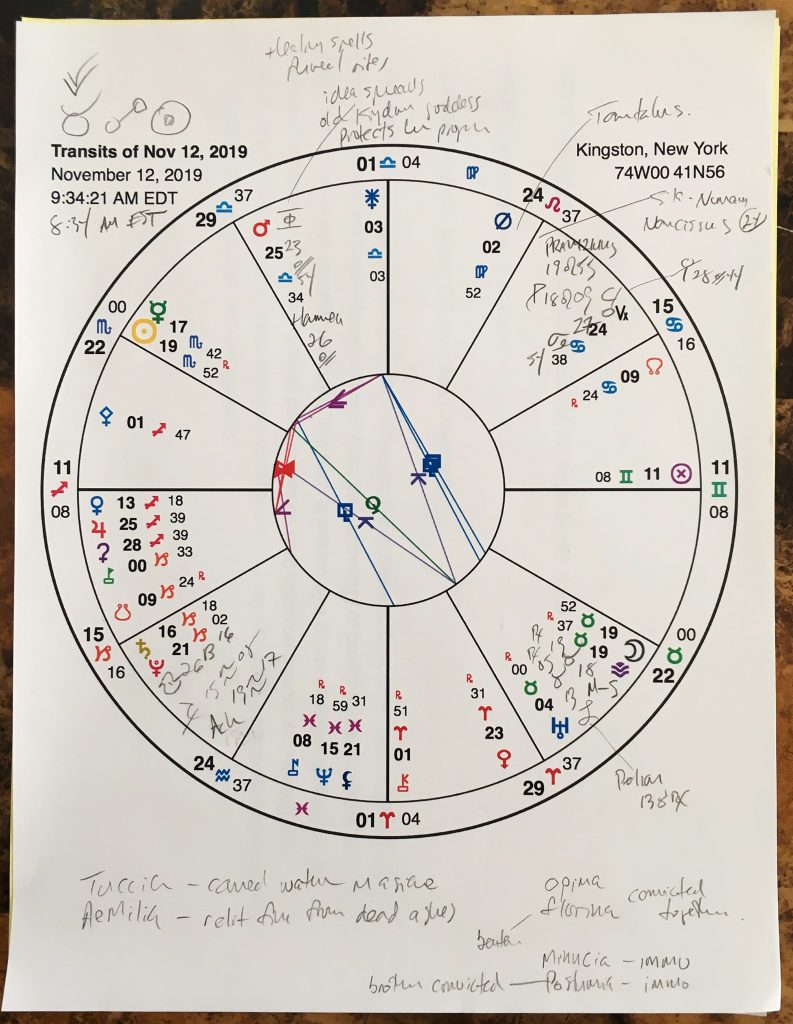 My chart for the Taurus Full Moon. Please note the position of Albion/1992 QB1 is 8 Taurus 15.